Kausani is situated in the midst of thick, dense pine forest atop a narrow ridge and separated from the towering mountains of the Nanda Devi range by low, medium mountains. Here, the grandeur of the Himalayas truly comes alive. The view of the snow-covered Trishul and Nanda Devi is so clear that one gets a feeling of the snows being within touching distance.

Standing 1890 mts. above the sea level, Kausani is nature’s own reserve. Even the father of the nation, Mahatma Gandhi had contemplated on the beauty of the region.

Several snow- capped peaks stand in a stately row, over 300 kilometers, shining against the azure sky making the horizon as seen from Kausani an enviable spectacle. The glory of the snow crowned Himalayan range reaches its pinnacle when the sun rays turn them into crimson and gold.

Mahatma Gandhi, who spent 12 days in 1929 at Kausani, penned his memorable commentary on the Gita-Anasakti Yoga inspired by the scenic grandeur of this richly gifted spot. The guest house where the Mahatma stayed is now known as the Anasakti Ashram.

Hindi poet laureate Sumitra Nandan Pant was born in Kausani.  Sumitranandan Pant (May 20, 1900 in kausani Uttarakahnd– December 28, 1977) was one of the most famous modern Hindi poets. He is considered one of the major poets of the Chhayavaadi school of Hindi literature. Pant mostly wrote in Sanskritized Hindi. Pant authored twenty-eight published works including poetry, verse plays and essays.

Pant was the first Hindi poet to receive the Jnanpith Award, in 1968. He did so for acollection of his most famous poems, titled Chidambara. He was awarded the Nehru Peace Prize by the Soviet Union for Lokayatan. Pant received “Sahitya Kala Academy” award for “Kala Aur Budhdha Chand”. Indian Government honored him with ‘Padmavibhushan’.

Pant’s childhood house, in Kausani, has been converted into a museum. This museum displays his daily use articles, drafts of his poems, letters, his awards etc.

Kausani is ideal for those who seek to escape from the din and dust, hustle and bustle of big cities and wish to spend a quiet holiday in the lap of nature. Indeed, Kausani is a veritable heaven of beauty to which an excursion must be made on visiting Kumaon.

Season: Round the year 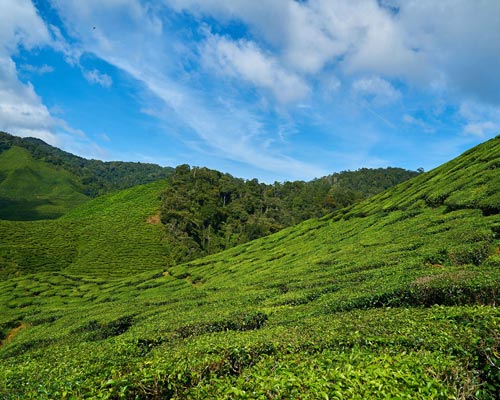 The famous tea garden is situated at the height of 1800 meter from sea level. The tea produced here is rich in flavor and of export quality. Kausani is the only place away from the traditional tea plantation areas in India that produce organic orthodox tea. This high-flavored tea is exported to many countries, including Australia, Germany, Korea and the US. 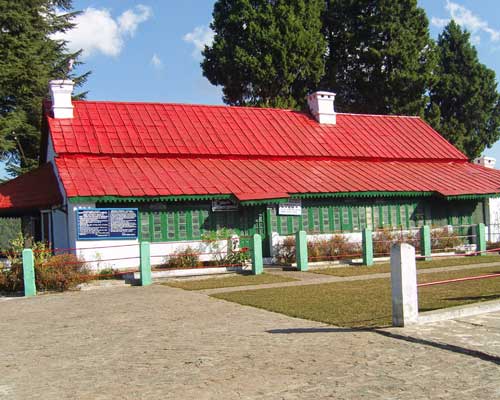 Anasakti Ashram is one of the major attractions in Kausani. Mahatma Gandhi, during his stay at Kausani, penned his memorable commentary on the ‘Gita-Anashakti Yoga’ inspired by the scenic grandeur of this richly gifted spot. Mahatma Gandhi was so much impresses that he started calling it “Switzerland of India”.

A temple and the village of the same name is 5 km trek from Kausani.The temple is situated about half way up the hill above the village. The first is a small conical structure, 2.5 to 3 meters high, dedicated to Bhairon. The main temple is close to this on the north, a squre, slated structure, with the door facing the south, and figures of rajas, etc., sculptured on the walls. 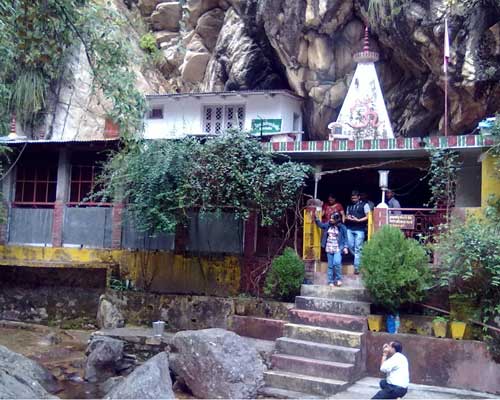 Rudradhari Falls and Caves located 12 km away from the town, at a place with terraced fields, lush green paddy fields and dense green pine forests. The falls impinging the valley flows as rivers and small springs. Close to the waterfalls, the Shiva Temple at Someshwar is located. These magnificent waterfalls can be viewed while trekking to Adi Kailash region in the hill station of Kasauni. 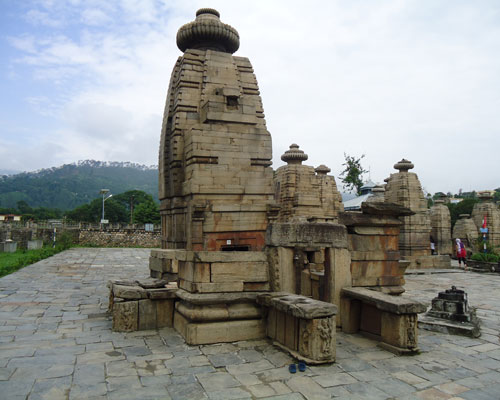 Baijnath is located about 17 kms from Kausani. It is a small, ancient time which seems to have been unaffcted by time. It was once the capital of the Katyuri dynasty of kings and this place was known as Kartikyapura. Baijnath is important not only because of this fact alone; it is also a very important place from historical point of view as well. 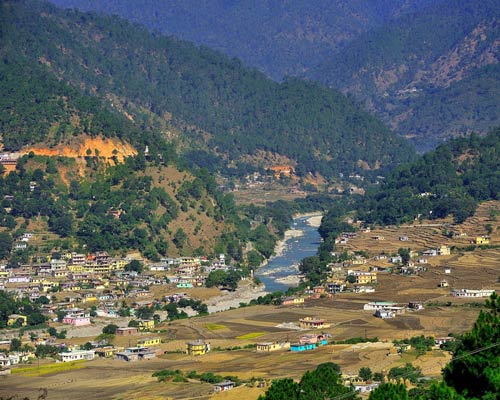